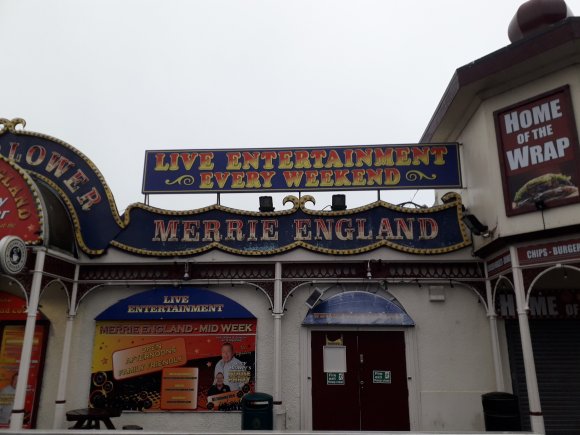 I waded along a rainy promenade, an old construction sidled by glimmering black water, in view of a point where the sky and the earth can bow at the right angle, and the North Pier Theatre. The visit from Damon Albarn’s sometime side project, The Good, The Bad and The Queen (TGTBATQ), charged the drizzly air of this maritime town, as people flocked to Blackpool’s North Pier Theatre to catch the show.

Blackpool is a show all by itself. It is a historically innovative place. Her pioneering use of electricity, the railway and steam age, and quintessential Englishness inspire millions of tourists annually. It truly is something to behold – jeering defiantly at the rest of the world for loving what it is – and it is easy to be shepherded by the gales of the Irish Sea towards built-up smatterings of faded Victorian grandeur. Standing amid the carousel bars and amusement vendors, I am in Merrie England, however, scratch the surface, and I detect a stubborn, if not quivering, British upper lip. And that’s why I’ve come.

To add my voice to the budgie-less mineshaft of Brexit chatter, the Brits are making a mistake. Their graceless identity crisis is misunderstood by the very ones that elected to sever ties and bizarrely afforded credence by some that fought to remain. I see a morose acceptance – the ennui on average people’s faces as though they seem to ‘just get on with it’ with total disconnect from the tattered paradise around them. PoundShop’s occupy every second corner, Blackpool Tower is nearly reduced in size by the number of people ignoring it, and both piers are tacky reminders of how proud the English are of themselves – if it aint broke, why fix it. This is why I chose Blackpool. I’d come to be entertained – to celebrate that very feeling. Merrie England was calling and The Good, The Bad, And The Queen were revving up to play Merrie Land in full.

The boards approaching North Pier Theatre were slick black and endless, the evening air thin and wet, and all lights were dulled to appropriately to match the mood. Merrie Land – something of an investigation of what it is to be English – contains songs of longing, regret, defiance, disappointment, and is a postcard from the edge of the worst break up you’ve ever gone through. Albarn, Allen, Simonon, and Tong, dominated the compact stage – buoyed by the crowd who revelled in each bar of every tune that mirrored the moonlight slick promenade, and conversely, the promise of the pleasure beach. There is genuine reverie in the audience right until the end. For a show that never promised to be action packed, there was a lot going on – from the appearance of the Welsh Male choir (Côr y Penrhyn) to Albarn’s rumbustious swagger, the all-female brass section, and tantalising encore of tunes from their self-titled debut album, The Good, The Bad, and The Queen, the red, white, and blue of that Lancashire town got their money’s worth. As did I, and to paraphrase TGTBATW, I left a bit of Ireland In Blackpool that night.

In early morning I’m shown the same place sans the optimism of the night before. A glib, grey seaside town presents itself, made lonelier by gutted roads and decades-old store fronts. The promise of progress. Posters cover windows for club nights, the Winter Gardens, but also remind residents of yonder year, the good times when performers like Charlie Cairoli performed his circus act every summer for 40 years. Poker machines abound – everyone’s a winner. And hey, they’ve got sticky rocks. Tablecloths in cafés are invisible beneath the Sarsons Malt vinegar bottles, the health and pleasure beach is hemmed in by littered piers, Sir Stanley Matthews plaques are wedged in somewhere between all of this and I hear a desperate plea from creaking buildings for reinforcement. I meet a homeless man my own age. We converse, and he asks if want a beer. Obliging, we quiz one another over the best way to rebuild the world over a game of pool. I garner an odd sense of pride from him, belief in the need for a hard reboot. Indeed, it’s in the faces of many around me – just not the physical surroundings.

Interestingly, and awkwardly, and despite a national pride that every nation possesses, there is a feeling that nothing great has happened here since its shrines to progress were erected, and a British answer to an incorrect question – which Blackpool answered an overwhelming yes – is that radical political change can breathe air into an overfed manatee swollen with self-satisfaction. Their time is coming. Perhaps in March, we’ll start to find out.

But the gig was great.